An ex-priest reflects on priestly formation, the crisis in Catholicism, and the past and future of faith

Tony Equale was ordained a Roman Catholic priest in 1965. Until his laicization and marriage in 1977, he was involved in experimental ministries — living in inner-city communities, organizing for welfare and tenants’ rights, working in factories, driving cabs in NY and DC, working to form unions and learning to farm in christian agricultural communities. In 1981 accompanied by his wife, Mary, a nurse-educator, he worked as a mechanics instructor and in the distribution of material assistance to war displaced in Mexico, Honduras and Nicaragua for 8 years. In 1991, he and Mary began a small commercial farm in Floyd Co. Virginia. Mary taught Social Work until her death from cancer in 2005. Tony, now in his 70th year and retired, volunteers with local labor unions and their campaigns.

“If you are trying to outgrow the micro-managing God of your youth — the one who has every detail of your life planned out and who wills every event, good or bad — this is the book for you. … Tony Equale salvages the best insights of classical theology, critiques Platonic dualism, takes seriously the most recent understanding of the cosmos, and introduces us to his understanding of an unknown God. Not easy reading but so rewarding!”

“An Unknown God is an extraordinary series of essays addressing the meaning of faith in a world of exploding scientific knowledge and ecclesiastical disarray for people shaped by the Roman Catholic tradition. The content is deeply researched and ranges across the fields of philosophy, theology, physics, history, cosmology and mysticism. The style is personal, challenging and provocative. Read it and be prepared for insights and struggle.”

“Equale has written a personally impassioned, but at the same time an academically grounded, call to all Christians to face both the inconsistencies, as well as the possibilities, of Christian belief and practice.  His criticisms blister.  But his proposals inspire.  Essentially, he is calling for a mystical reappropriation of Christian beliefs that will inspire a more intense involvement in the world.

The first essay is autobiographical and stands out from the others because of its personal character and the criticism it levels at the operations of the institutional Catholic Christian Church. All the other chapters are of a more topical nature. The second reviews the concept of the immortal soul, and opts for the recognition of the organicity of the human species. The third examines the traditional doctrine of God and rejects supernatural theism as rationally untenable; through a dialectical process, it finds in favor of a science-based, earth-centered panentheism. The fourth is philosophical and challenges the traditional understanding of “God” as esse in se subsistens, “Being itself.” The last two chapters attempt to recapitulate the entire discussion by examining the remarkable and often entirely unexpected ideas of the mystics which support the contentions of this book.

The book offers a foundational restructuring of spirituality that will support the political and ecological morality of our time.

An Unknown God, has been re-published by the Institute for Economic Democracy (IED) Press. The price is $25. Copies can be ordered on-line, or by e-mail, or by phone, or by snail-mail from them:

The Institute for Economic Democracy

BOOKS BY TONY EQUALE click on image for more information, to comment or to take part in discussion

Reflections on the Protestant Reformation 2016

Religion in a Material Universe 2012 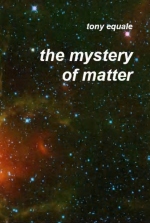